The Blue Flags 2018 have been awarded, the recognition that certifies the environmental quality of the coastal places of our Country, now in its thirty-second edition.

The recognition, awarded by the Foundation Foundation for Environmental Education (FEE) at the headquarters of the Cnr of Rome, also this year has awarded the Aeolian Islands.

The banners went to Lipari at Acquacalda, Canneto, to Vulcano at the Thermal Waters and at Gelso, to Stromboli at Ficogrande.

The Aeolian Islands represent a heritage for humanity from the historical, cultural, landscape and environmental point of view.

The assignment of the Blue Flags confirm not only the beauty of the Aoelian Islands, but also the attention that man has had for the protection of the environment.

But let’s take a closer look of what are these beaches.

It is located on the northern coast of the island, this beach takes its name from the village that hosts it.  It is a very suggestive, wild and uncontaminated beach, characterized by a long, narrow and gravelly coastline. Its particularity is given by the background of an imposing white mountain of pumice stone.

It is located on the east coast and is just 3 km from the center of Lipari. It is made up of sand and, for the most part, of gravel. It is famous for its beautiful bay with intense turquoise waters. Along the beach you can find several tourist areas equipped with sunbeds and umbrellas.

It is located on the island of Vulcano and extends into the southern coast of the island. It is a beautiful sandy and gravelly black beach, solitary and not very popular, dominated by a very suggestive lighthouse and from which it is possible to admire the Saracen coast a sell as Mount Etna. The sea that bathes it is blue, clear and transparent. It can be reached by car or motorbike along the Provincial road that from Porto Levante continues to Vulcano Piano and then branches off for Gelso or for Capo Grillo. Easier to reach it by boat: fishermen who make the journey can be found every day at the Black Beaches.

They are located on the island of Vulcano and are characterized by waters heated by sulphurous steam. In many places the water boils because of the presence to these pleasant and healthy submarine gas springs.

The Ficogrande Beach of Stromboli is located north of the Scari wharf. It is a black beach of fine sand with fine gravel in some places, which stretches for about 2 kilometers in the eastern part of the island. The first section is often occupied by fishermen of the area, who leave their boats there. Then the beach is free until the hotel La Sirenetta, beyond which you are in the north eastern part of  Stromboli, called Piscità.

As a backdrop to the coastline there is the Strombolicchio rock, born from one of the most ancient volcanic events in the Aeolian Islands 360,000 years ago. The sea that bathes the beach is an intense blue. The beach is one of the crowdest on the island, while remaining fairly quiet even in high season. 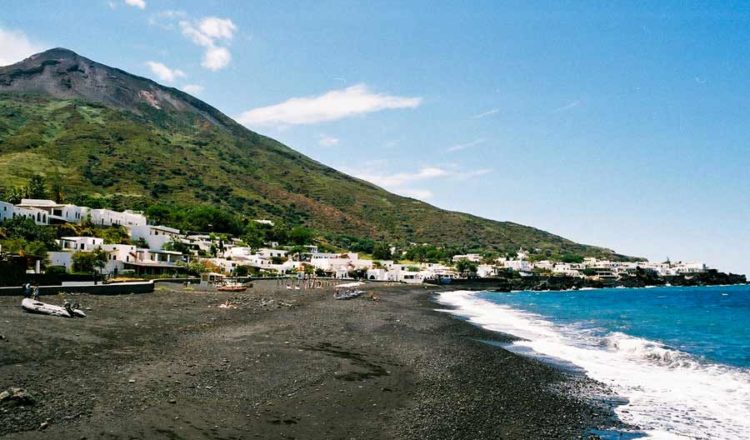 You have not yet decided where to go on vacation? For your stay at the Aeolian Islands choose in Lipari the Hotel A’ Pinnata, an elegant structure furnished in the typical Mediterranean style that rises on the panoramic bay of Pignataro Port. If you love relaxation and want a hotel with and equipped swimming pool, the Hotel Tritone is the one for you; if, instead, you plan a trip in company, choose the Hotel Residence Mendolita. For a dinner to remember Filippino Restaurant in Lipari Piazza Mazzini