Trekking Tour in the nature of Lipari

Walk a route immersed in the nature of Lipari Island.

The nature and history of the  Aeolian Islands have been intertwined to produce an extraordinary quantity of environments and culture.

Who visit Lipari for the first time will be surprised as on the island there are unexpected and different scenarios. It seems that its complex geological nature has conditioned everything else, and if you look closely so it is.

Today the trails with beautiful views are substantially 5.

The landscape  that you will find is a Mediterranean poodle prairie, with shimmering colors  and  still active fumaroles reign of the herring gull. Along the way you will find a water tank that collects water from the hot springs of the place “Bath”.

The path leads you to a detour, along which you will come to the kaolin quarries, abandoned today, but already used by the Greeks for the production of ceramics, some of which are on exhibited at the  Aeolian Archaeological Museum. 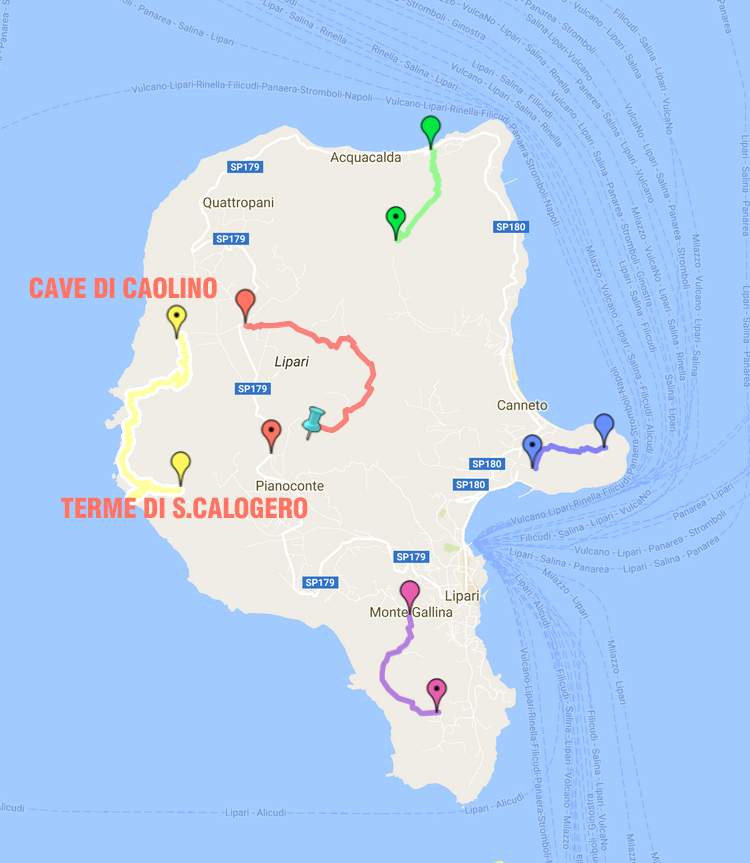 The Poggio Mushroom is located between the two main mountains, Monte Chirica and Monte Sant’Angelo, in the heart of the Lipari island. Here there is a thicket of heathers, strawberries, cysts and isolated chestnuts. In the distance, the extinct volcanoes of Monte Pelato and Monte Rosa complete a wonderful unexpected landscape. 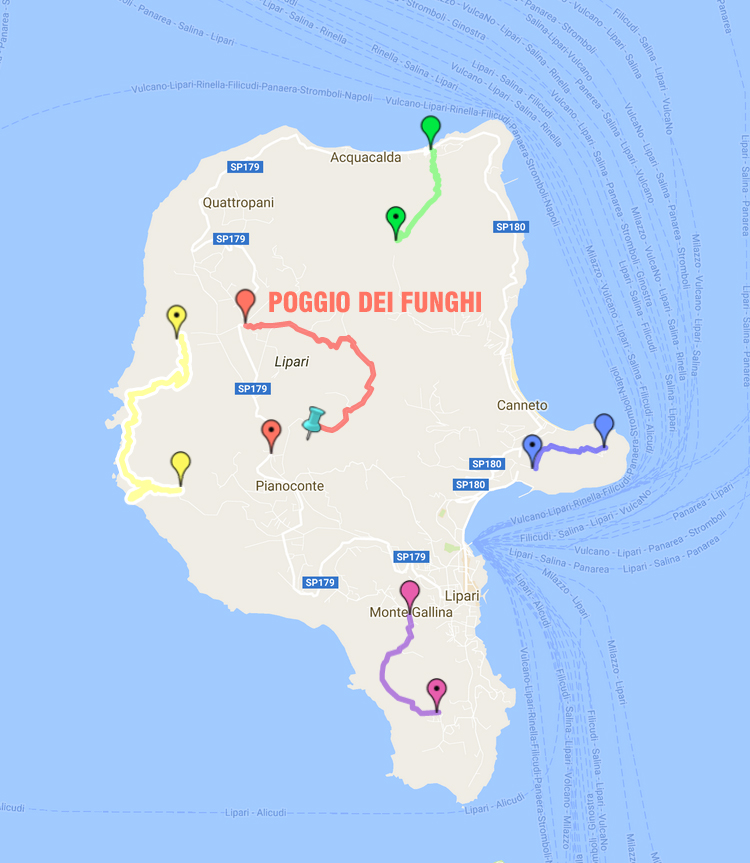 The path joins the fraction of Lami with Acquacalda. It is possible to reach Lami through the regular public service.
After the residential area you will be in front of a fairly steep descent that leads into a dirt road ”The Valley”. Follow the signs to Acquacalda. The trail gives the excitement of being in front of a unique landscape, which hugs the coast of Acquacalda, the pumice quarries (closed in 2007) and the thicket settled within the crater depression (Fossa Castagna), interrupted occasionally by vineyards and crops. 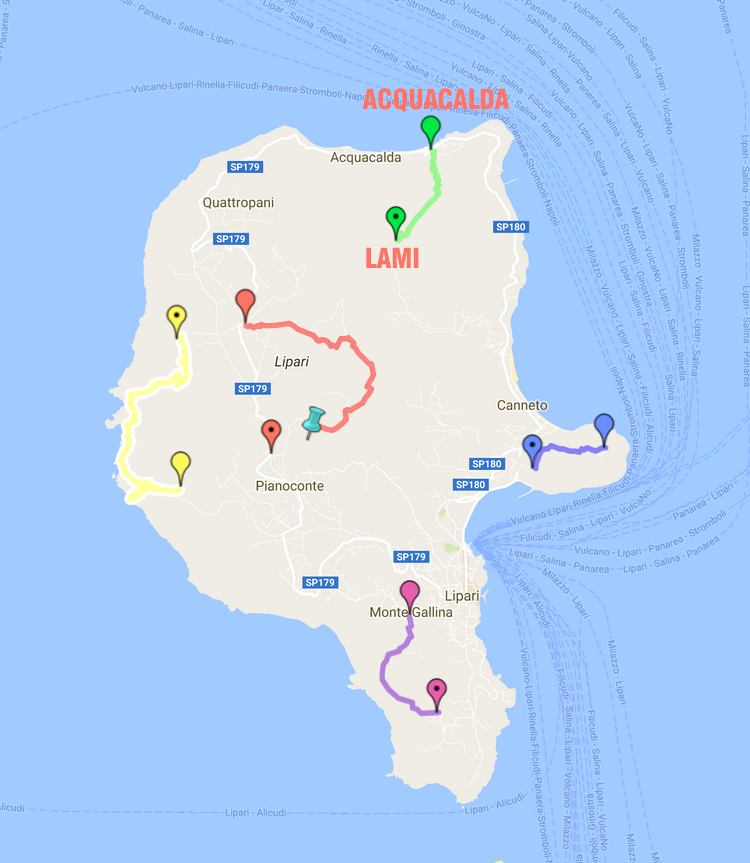 Capistello is located south of the Lipari island. You  reach the church San Salvatore along the rise that characterizes Capistello and turning right at the roundabout; a small road will lead to your destination. The trail starts from here! All around, low scrubland and bush nuclei cover the slopes, while the coastal cliffs are occupied in the spring of populous colonies of herring gull. Arrived at the church of  St. Bartolo at Monte it is possible to take a public bus to return to Lipari. 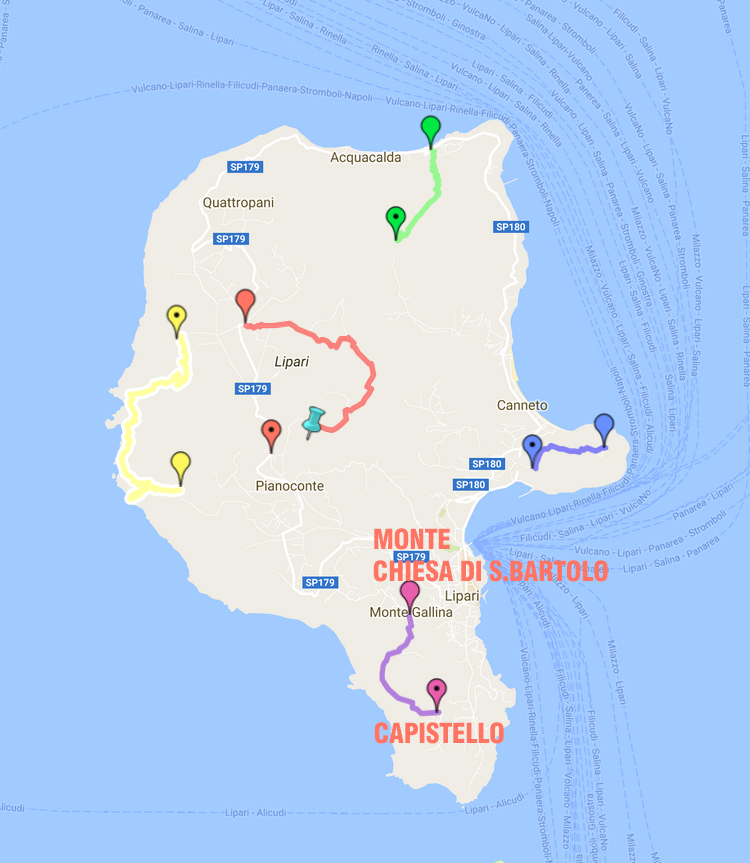 It is possible to reach Monterosa walking from Lipari or Canneto or with the public bus stop  Pignataro port (next to the aqueduct). You can reach the ancient church , “The Cross”, built by volunteers, where you can admire a breathtaking view over the towns of Lipari and Canneto. 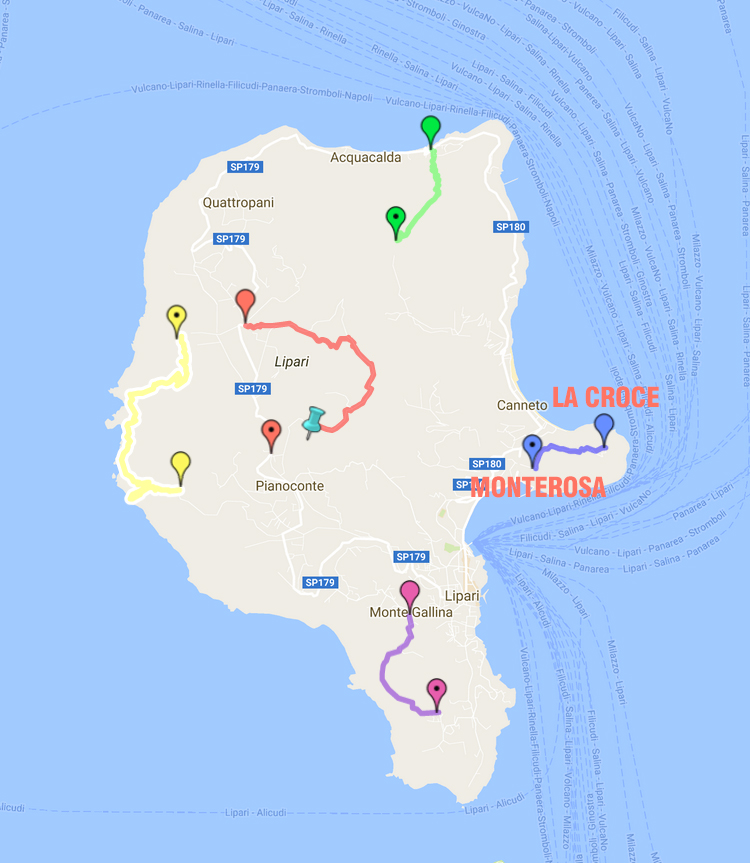 But how to equip yourself?

The recommended minimum equipment consists of : hiking shoes, long pants, windbreaker, hat, lunch box and a sufficient quantity of water, absolutely not to be found during the routes

Where to stay in Lipari?

The Lipari island is equipped with a large number of accommodation of good quality and comfort (holiday homes, hotels, residences, B&B), for that reason you can find the best solution for every need.

Where can I eat well in Lipari??

If you’re planning a holiday in Lipari or even a simple trip, you certainly ask yourself.

We tell you then where, who live in Lipari all year, we go regularly to eat.

Price: about 45 euro up for a full dinner. (it is in Piazza Mazzini and is open for lunch and dinner)

And for a snack?

If you are in Lipari you can’t not eat the Pani Cunzatu!  A simple sandwich seasoned with tomato, mozzarella, basil and extra virgin olive oil. It should be prepared in the morning and ate at lunchtime, to give way to the bread to absorb the sauce well. It is a must in beach or for a  day on boat, and if there comes a saltwater sketch above, it will be even tastier.

This website uses cookies to improve your experience while you navigate through the website. Out of these, the cookies that are categorized as necessary are stored on your browser as they are essential for the working of basic functionalities of the website. We also use third-party cookies that help us analyze and understand how you use this website. These cookies will be stored in your browser only with your consent. You also have the option to opt-out of these cookies. But opting out of some of these cookies may affect your browsing experience.
Necessary Always Enabled
Necessary cookies are absolutely essential for the website to function properly. This category only includes cookies that ensures basic functionalities and security features of the website. These cookies do not store any personal information.
Non-necessary
Any cookies that may not be particularly necessary for the website to function and is used specifically to collect user personal data via analytics, ads, other embedded contents are termed as non-necessary cookies. It is mandatory to procure user consent prior to running these cookies on your website.
SAVE & ACCEPT
Go to mobile version